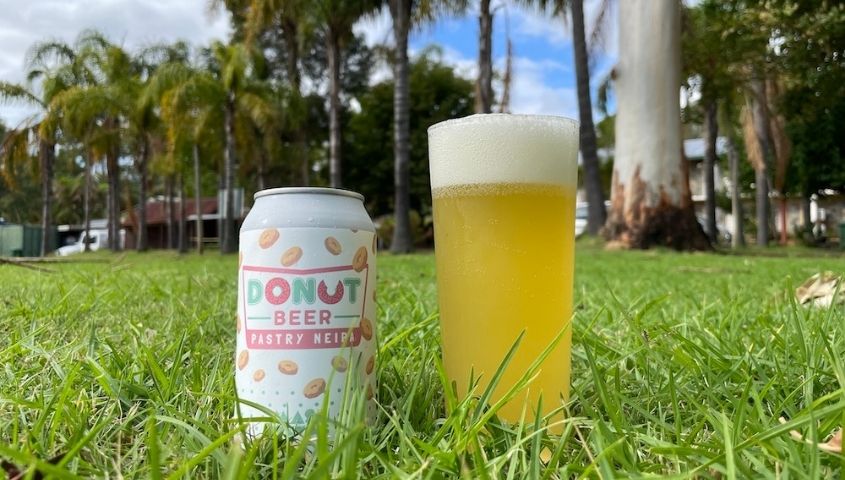 A Western Australian brewery has taken the creative and socially conscious step of converting thousands of doughnuts into a delicious new craft beer, and in the process, will raise vital funds to help feed hundreds of people across the state.

Mash Brewing, located in Perth’s Swan Valley region, has released a limited range of “Donut Beer” which has been specially brewed from 114 kilos of doughnuts.

The idea emerged after the brewery teamed up with Perth based sustainability start up “Donut Waste,” which focuses on reusing beer clips and recycling coffee grounds.

Head Brewer, Adrian Godwin said Mash Brewing jumped at the chance to play a role in generating a “circular economy” by preventing the unsold glazed, sprinkled and cookie doughnuts from going into landfill and in turn produce a “Pastry New England India Pale Ale”.

“I wanted to get involved from the moment the idea came about. I love brewing with different ingredients and the chance to brew more than two thousand doughnuts and see what happens was an opportunity to get creative” Mr Godwin said.

“We had a lot of fun in the process. We added a few hops as well to balance out the flavour, so when people ask me what it tastes like, the best way to describe it is like a tropical glazed doughnut.”

This isn’t the first time the former IT expert turned brewer has practiced alchemy with food, producing a limited-edition Christmas Pudding stout.

Mash Brewing will be donating 50-cents from each can of beer sold to OzHarvest WA allowing the national food charity to deliver an additional meal to someone in need.

State Manager of OzHarvest, Jennifer Keen said she was grateful to Mash Brewing for selecting the charity for this special release.

“All financial donations will assist us to meet the growing demand for food relief in our local community and to keep the wheels of our vans turning.”

“With eight yellow vans on the road, OzHarvest WA currently collects more than 110 tonnes of quality surplus food each month and delivers this good food, free of charge, to 150 local charities, schools and community groups across Perth and the greater metropolitan area to help those most at risk”.

“Donut Waste” founder Sharka Hornakova said Mash Brewing’s food rescue effort would play an important role in highlighting the whopping 7.6 million tonnes of food which goes to landfill every year, even though 70-percent of it is perfectly edible.

“The cost of food waste to the Australian economy is around $37- billion dollars a year”.

“Food waste is a global challenge that has environmental, economic, and social impacts” Ms Hornakova said.

“Today’s effort by Mash Brewing will help achieve the Federal Government’s target of halving food waste in Australia by 2030” she added.

Mash Brewing’s new “Donut Beer” can be bought at its Swan Valley venue and selected independent liquor stores from tomorrow.

On-premise sales of the beer can also be purchased at the brewery’s Bunbury venue from next week.

ABOUT DONUT WASTE
Since its inception in 2021, Donut Waste has collected ten tonnes of coffee grounds from cafes and roasters around Perth and delivered them to community gardens for composting.

In 2022, it added plastic beer clips (4-pack and 6-pack holders) collections to its business plan and has already secured twenty-six bottle shops and recycling centers to come on board. Donut Waste has so far prevented 11,000 beer clips from going into landfill.